Colloquium Series “The Story of Antaryami” 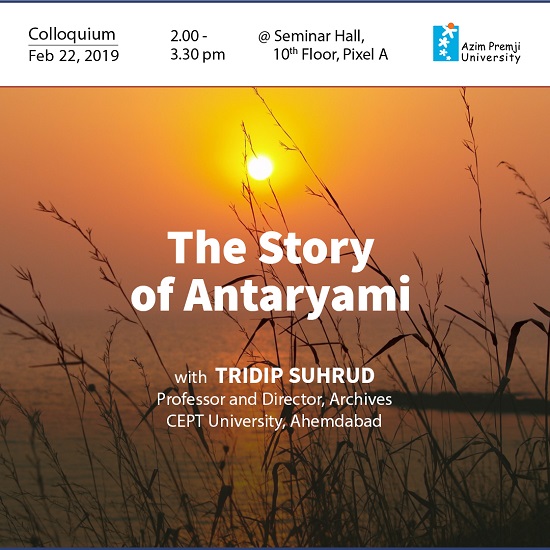 Mohandas Karamchand Gandhi's Autobiography The Story of My Experiments with Truth written originally in Gujarati and translated almost simultaneously in English by Mahadev Desai occupies a unique place in the Autobiographical tradition in the world. The lecture would try and capture the process of reading Gandhi in Two Tongues, the relationship between the two texts and the process by which the cadence of the original is sought to be captured in the English translation with help of notes. Apart from the question of translation of texts the lecture would seek to explore the notion of Gandhi's quest to see God face to face, its relationship with Ashram observances and the presence of Antaryami which guided his actions.

Tridip Suhrud is a scholar, writer and translator who works on the intellectual and cultural history of modern Gujarat and the Gandhian intellectual tradition. As the director and chief editor of the Sabarmati Ashram Preservation and Memorial Trust (2012-2017), he was responsible for creating the world’s largest digital archive on Gandhi- the Gandhi Heritage Portal. He has authored 28 books, of which include the critical edition of Hind Swaraj, Narayan Desai’s four-volume biography of Gandhi, My Life is My Message, and the four-volume epic Gujarati novel, Sarasvatichandra. His most recent work is a critical edition of Gandhi’s autobiography My Experiments with Truth in two languages; Gujarati and English.

Tridip Suhrud is presently translating the diaries of Manu Gandhi, covering the period between 1942 and 1948, compiling a series ‘Letters to Gandhi”- of unpublished correspondence to Gandhi- and working on an eight-volume compendium of testimonies of indigo cultivators of Champaran. He is currently professor and director, Archives, at CEPT University, Ahmedabad and serves as Chairman of the Governing Council of MICA.