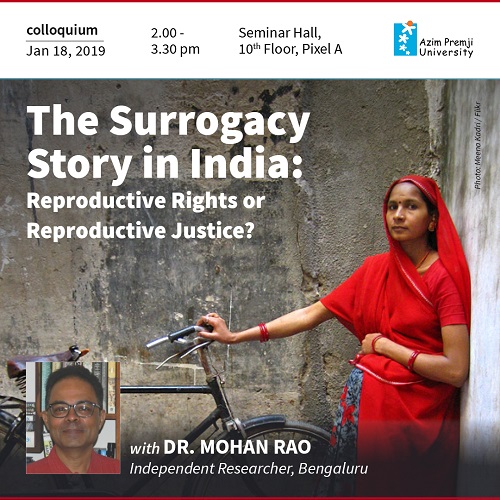 The talk briefly traces the story of commercial surrogacy in India, linking it, as few do, to the global bio-economy. The global bio-economy is dependent on women’s body parts, many of which are derived from reproduction or IVF. Policy prescriptions, and indeed most feminist responses, draw on the notion of reproductive rights and choice. These ignore a salient framework, namely reproductive justice.

Mohan Rao was, till recently, a Professor at the Centre of Social Medicine and Community Health (CSMCH), School of Social Sciences, Jawaharlal Nehru University, New Delhi. A medical doctor specialised in public health, he has written extensively on health and population policy, and on the history and politics of health and family planning. He is the author of From Population Control to Reproductive Health: Malthusian Arithmetic (Sage, New Delhi, 2004) and has edited Disinvesting in Health: The World Bank's Health Prescriptions (Sage, New Delhi, 1999) and The Unheard Scream: Reproductive Health and Women's Lives in India (Zubaan/Kali for Women, New Delhi, 2004). He has edited, with Sarah Sexton of Cornerhouse, UK, the volume Markets and Malthus: Population, Gender and Health in Neoliberal Times (Sage, New Delhi, 2010). With Sarah Hodges, he has edited Public Health and Private Wealth: Stem Cells, Surrogacy and Other Strategic Bodies (OUP, 2016). His latest work is the edited volume The Lineaments of Population Policy in India: Women and Family Planning (Routledge, 2018). He has been a member of the National Population Commission, and several Working Groups of the National Rural Health Mission of the Government of India. He is also actively involved in the Jan Swasthya Abhiyan (People’s Health Movement).