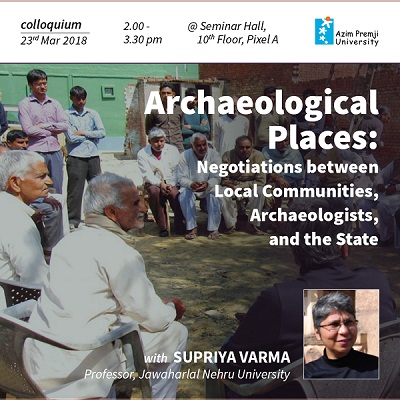 In South Asia, local communities most often live near or amidst archaeological places. Their lives are in many ways framed and structured by these places. At the same time, these places too are impacted by the communities that live nearby. This symbiotic relation is often a result of the high population density in the Indian subcontinent, particularly in the Gangetic plain of North India. This story gets further complicated by legislative practices of preservation related to ancient monuments and archaeological sites, as well as the custodianship of antiquities and art treasures.

In order to bring out the complexities of these issues, I will, in my presentation, be focusing on the archaeological site of Indor Khera in the Upper Ganga Plains of North India, which was surveyed and excavated between 2004 and 2010. In the 19th century, the village occupied about one-fourth of the area, which has now expanded over two-thirds of the mound. While Indor Khera merited archaeological attention in its own stead, what is usually neglected, particularly in South Asia, are issues related to the current social contexts of archaeological sites. It, thus, becomes imperative to address questions such as (1) local perceptions to the mound, and the daily negotiations of the local residents with the mound; (2) the challenges of undertaking archaeological research at mounds that are still inhabited by local communities and; (3) difficulties and hindrances in enforcing regulations and protection of archaeological places, such as Indor Khera.