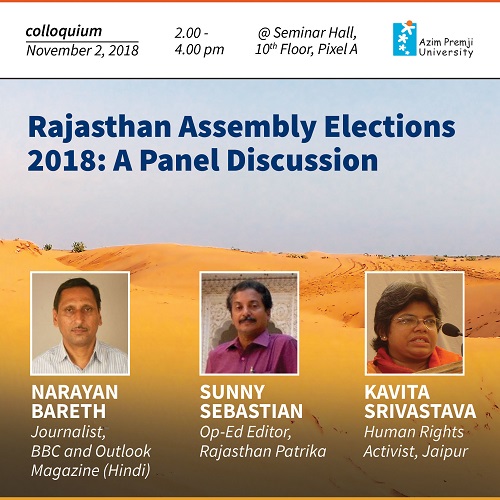 About the Panel Discussion

As part of the State-by-State Panel Discussion Series, this colloquium features a panel discussion on the imminent State Assembly Elections in Rajasthan. Close observers of the electoral politics in the state will share their analyses of the electoral trends in the discussion.

Narayan Bareth presently works as a freelance journalist with BBC and Outlook Magazine (Hindi). Starting his professional life with the Hindi daily Navbharat Times in 1986, he has reported from Kota, Jodhpur and Jaipur. He was BBC Rajasthan correspondent for over a decade.  He has also worked with other newspapers such as Dainik Bhaskar, The Asian Age andThe Pioneer in his three decade long career in journalism. He was Professor at Haridev Joshi University of Journalism and Mass Communication (2013-2016) and at the University of Rajasthan (2016-2017).

Sunny Sebastian is the Op-Ed Editor with Rajasthan Patrika. After working in The Hindu for over twenty five years, he became the founder Vice- Chancellor of Haridev Joshi University of Journalism and Mass Communication in Jaipur in 2012 and completed a three-year tenure there until 2015.  He considers himself as a people-oriented media person, a development journalist who enjoys writing human interest narratives and stories on wildlife and nature. Over the years he has developed his own net- work of news sources in all the districts of Rajasthan.

Kavita Srivastava is General Secretary of People’s Union for Civil Liberties and the President of its Rajasthan chapter. She is also the convener of the Right to Food campaign’s steering group. For two decades, she has worked with other social various activist organizations to promote nonviolent ways of ensuring justice to survivors of atrocities committed on the basis of gender, class, caste, religious group or national identity.