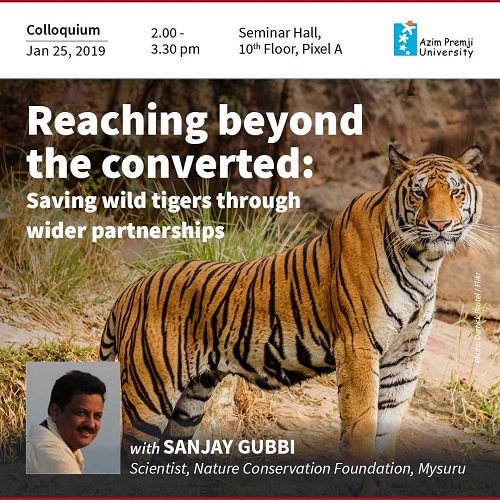 A paradox of conservation, especially in the biodiversity-rich but socially-complex tropics, is that conservation practitioners often find themselves preaching to the converted, when they should in fact be reaching beyond them. In the real world, conservation practice is expected to run the race where conservation science leaves off and take it to the finish. Mitigating threats to flagship species like the tiger, therefore, involves action in varying contexts and at multiple levels, most of which lie beyond the ambit of science. Tiger conservation in India intersects staggering social, economic and political complexities, and conservation strategies need to be crafted, not just based on science, but also based on a solid practical grasp of social realities. How does one navigate this vast, complex, and mostly uncharted arena to bring about effective and lasting conservation outcomes? And what are the wider lessons one may draw from such explorations? These are two broad questions that I address in my talk. I present pragmatic, on-ground examples of how we have engaged key stakeholders in wider society—comprising not only the traditional constituency of policy/decision makers, but also social/religious leaders, elected representatives, the media and conservation volunteers—to play critical roles in tiger conservation. Forging creative partnerships takes patience, planning, consistent follow-up, timely action and reasonable compromises. But once forged, such alliances can stand up even to powerful economic and political forces. Through such partnerships, we have together helped minimize the deleterious effects of habitat fragmentation on tigers and their prey, to expand protected area coverage, to create habitat corridors, as well as to strengthen law-enforcement efforts by improving the welfare of protected area frontline staff.

Sanjay Gubbi’s research interests include large cat science, human-wildlife conflict, conservation policies and impacts of developmental projects on wildlife. Recipient of the 2017 Whitley Award, author of Second Nature: Saving Tiger landscape in the 21st Century, he has worked with various stakeholders to bring about on-ground changes for wildlife conservation in the state of Karnataka. He likes to use his scientific understanding of wildlife to bring about changes in conservation policies. He is particularly interested in popularizing wildlife science and conservation in local languages. He has authored two books in Kannada in addition to several popular articles. He currently works with the Nature Conservation Foundation under the Western Ghats programme.