Colloquium Series: "The Epidemic of Fake News in India" 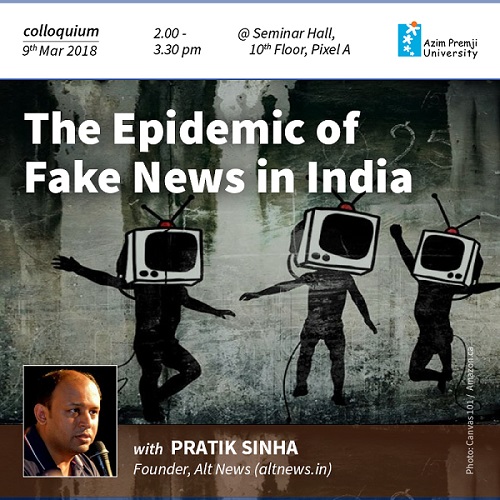 "Fake News" - This phrase usually invokes associations with Donald Trump and the US elections. Not many know that the issue India currently faces predates Donald Trump. The issue seen in India is unprecedented in many ways. In May last year, a rumour was circulated on WhatsApp in Hindi which said, “Suspected child lifters are carrying sedatives, injections, spray, cotton and small towels. They speak Hindi, Bangla and Malyali. If you happen to see any stranger near your house immediately inform local police as he could be a member of the child lifting gang." This message led to widespread fear and ended with the lynching of seven people. About twenty people have since been charged for these crimes. A WhatsApp rumour has killed 7 people and ruined the lives of another 20 people.

Alt News (altnews.in) is an endeavour to understand this situation, raise awareness about it at various levels from the citizenry to media organisations to government and find means and ways to counter it. This talk attempts to understand why the fake news situation in India is unique from a global perspective, the efforts being made to counter it, and the challenges facing them.

Pratik Sinha is founder of Altnews.in and member Jan Sangharsh Manch. After graduating from Bangalore Institute of Technology, he worked in various technological companies in India, US, and Vietnam. Returning to India in 2013, he has been involved with Jan Sangharsh Manch, a civil liberties organisation in Ahmedabad which works on issues of human rights and civil liberties.