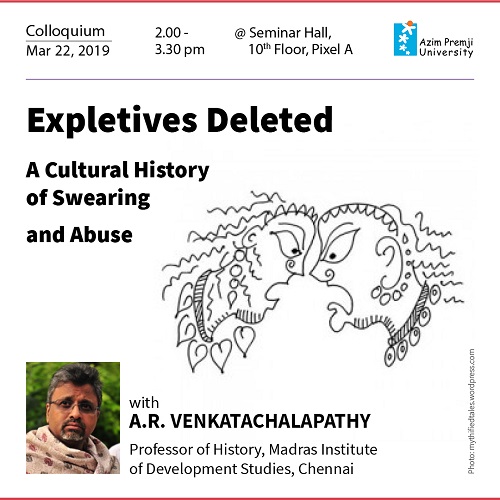 Swear words are seen as a sign of lack of culture. Facing extensive censorship in writing, not surprisingly they have also been neglected by historians. The talk will argue that swear words offer a unique insight into a culture. Strongly held notions and prejudices about caste, class, and gender are revealed through them. Further, swear words are not constant: they shift with social transformations and cultural change, and in turn reflect such transformations. The talk, largely focused on Tamil, draws from a range of sources – literature, epigraphy, folklore – to reflect on a cultural history of swear words.

A. R. Venkatachalapathy, a professor of history at the Madras Institute of Development Studies (MIDS), has taught at universities in Tirunelveli, Chennai, Singapore and Chicago. A recipient of the V.K.R.V. Rao Prize (History, 2007), Chalapathy has published widely on the social, cultural and intellectual history of colonial Tamilnadu. Apart from his scholarly writings in English he has written/edited over thirty books in Tamil. His publications in English include Tamil Characters: Personalities, Politics, Culture; Who Owns That Song?: The Battle for Subramania Bharati’s Copyright; The Province of the Book: Scholars, Scribes, and Scribblers in Colonial Tamilnadu; In Those Days There Was No Coffee: Writings in Cultural History; (ed.) Love Stands Alone: Selections from Tamil Sangam Poetry; and (ed.) Red Lilies and Frightened Birds: ‘Muttollayiram’.