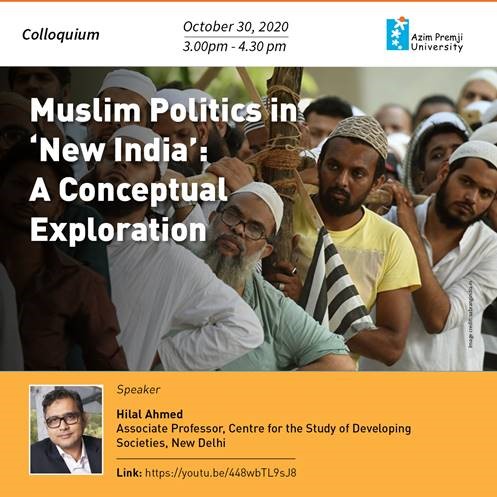 This presentation tries to map out the contemporary moment of Muslim politics in India. Deviating slightly from the commonsensical perception that the contemporary moment entirely means here and now, I try to historicize the post-2014 Muslim politics by placing it in the long postcolonial Indian story of democracy. In this sense, the official idea of New India is recognized as a significant watershed moment of Indian politics; and for this reason, I treat the electoral success of the Bharatiya Janata Party (BJP) under the leadership of Narendra Modi in 2014 as the beginning of our contemporary political time.  I question the dominant descriptions of Muslim politics in India by highlighting three serious conceptual problems. First, there is an assumption that Muslims constitute a single homogeneous community, whose political/electoral behaviour is self-evident. Second, the ‘Muslim voting’ is envisaged as an independent self-governing exercise as if Muslim politics all about Muslim voting. Third, Muslim voting behaviour is always understood in relation to Muslim political representation in legislative bodies. It is assumed, in fact rather uncritically, that there is an organic and instrumental relationship between Muslim voters and Muslim MPs and MLAs. Reliability on these assumptions does not allow political analysts to pay attention to various sociological, cultural, and economic factors that determine Muslim political imaginations.  Muslim politics, I argue, is not simply about the number of Muslim MPs and MLAs. Nor is it entirely reducible to the voting behaviour of Muslim electorates. The political engagements of Muslims in contemporary India must be explored as an ever-evolving independent discourse, which does not necessarily respond to the challenges posed by Hindutva politics.  The presentation deals with three prominent issues: Muslim portrayal in public life, Muslim representation in public institutions (including in the legislative bodies), and most importantly, Muslim political actions (or inaction!). For analytical purposes, these issues are addressed as three interrelated facets of contemporary Muslim politics —Muslim presence, Muslim representation and Muslim participation.