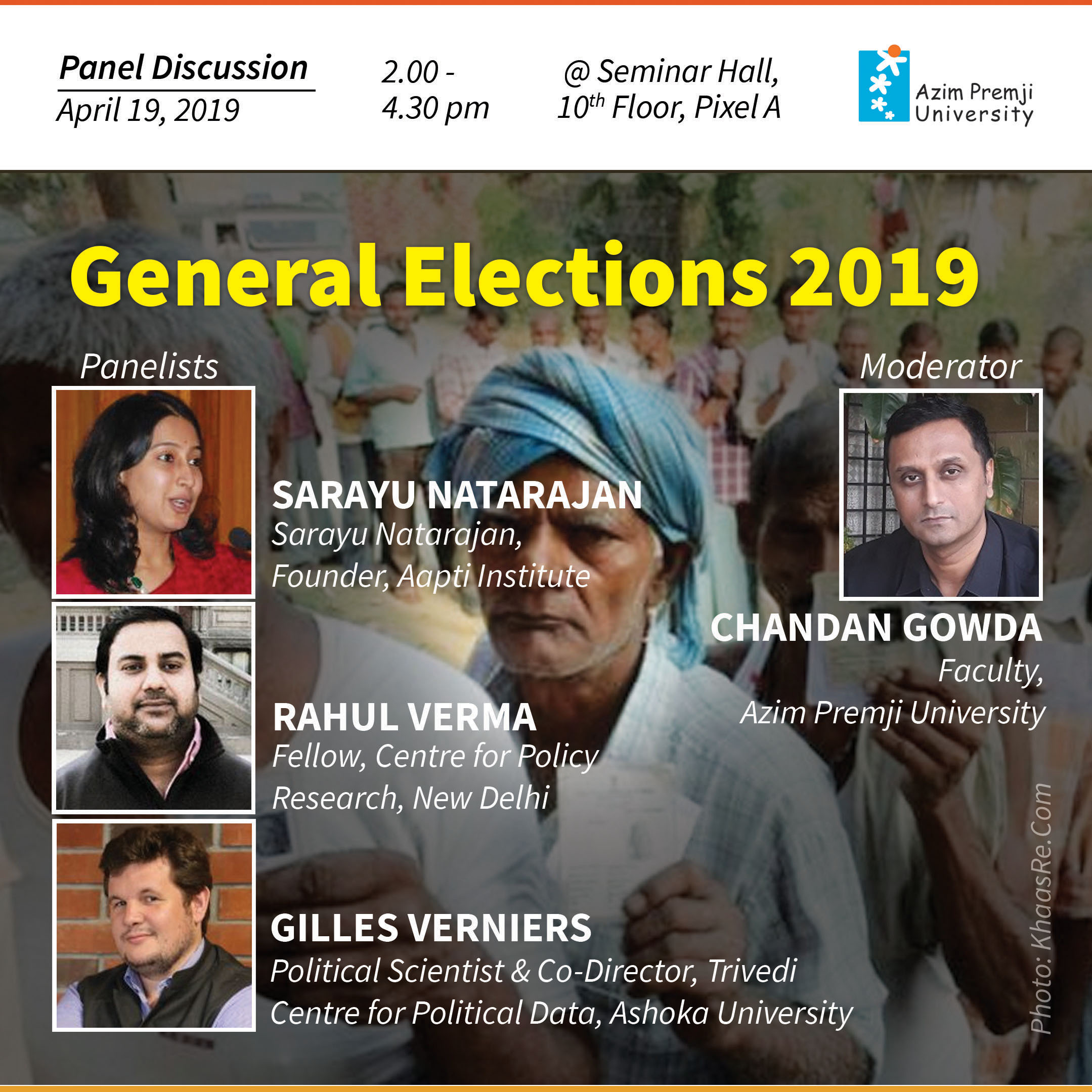 The talk will examine the five southern states - Tamil Nadu, Telangana and Andhra Pradesh, Kerala and Karnataka - to highlight relevant trends in the 2019 General Elections. From looking at the state elections in TN, Telangana and AP, to the the fall out of the recent Assembly elections in Karnataka, this talk will explore a few relevant factors state-wise such as incumbency, coalitions, caste equations and underlying social trends.

Title: The Oppositional Politics under the Second-Dominant Party System
The rise of the BJP in 2014 and its subsequent victories in many states of India indicates the onset of the fourth party system. As the BJP continues to occupy the centre-right ideological space of Indian politics, the centre-left space is undergoing a massive churning. This talk will focus on the predicament of the Congress and the other opposition parties in 2019 and beyond. Drawing on the pre-poll surveys, the talk would provide a peek into the re-organisation of competitive space in key states.

Title: King in the North? The BJP’s Prospects across the Hindi Belt and Beyond (Gilles Verniers)

The talk will look at the contest in the Hindi Belt and the state of oppositions and alliances across Northern India, starting from recent state elections in Rajasthan, Madhya Pradesh and Chhattisgarh. It will focus on some of the significant developments in electoral politics post-2014, such as the resurgence of traditional elites via the rise of the BJP and their consequences for state governance. The talk will then focus on the prospects of the BJP to compensate nearly certain losses in the Hindi belt by expanding its hold over other regions, particularly in the East.

Dr. Sarayu Natarajan is the Founder of Aapti Institute that does research at the intersection of technology and society. Her doctoral work examined the relationship between political intermediation and housing, and used that to explore the ways in which the BJP is growing in urban India. She co-hosts a podcast called Ganatantra, which is running a special series for the upcoming elections.

Rahul Verma is a Fellow at Centre for Policy Research. He is also a PhD candidate in Political Science at the University of California at Berkeley, and his doctoral dissertation examines the historical roots of elite persistence in contemporary Indian politics. His book, Ideology and Identity: The Changing Party Systems of India (OUP: New York, 2018) co-authored with Pradeep Chhibber develops a new approach to defining the contours of what constitutes an ideology in multi-ethnic countries such as India. His research interest includes voting behavior, party politics, political violence, and media. He is a regular columnist for various news platforms and has published papers in Asian Survey, Economic & Political Weekly, and Studies in Indian Politics.  Before starting his PhD at Berkeley, Verma completed his MPhil in Political Science from Delhi University, MA in Development Studies from Tata Institute of Social Sciences (TISS), Mumbai and a BA from Kirori Mal College, Delhi University.

Gilles Verniers is Assistant Professor of Political Science at Ashoka University and Co-Director of the Trivedi Centre for Political Data. His research interests include mechanisms of representation and participation in India, state politics, democratisation in South Asia, sociology of elected representatives, controversies and problems in India's democracy, ethnic and post-identity politics, minority politics, and political parties. He completed his B.A in Economics, Social and Political Sciences from the University of St. Louis, Brussels in 2000. He earned his M.A. in Political and Social Sciences from the Catholic University of Louvain (UCL), Belgium in 2004. After finishing his M. Phil in Comparative Politics and Societies with a specialization in Asia from Sciences Po in 2005, he completed his Ph.D. in Political Science from Sciences Po, affiliated with the Centre for International Research and Studies (CERI), Sciences Po. He has been a visiting scholar at the Institute of International Studies, University of California, Berkeley and a part of several research projects including a project on the visuality of Democracy funded by the Alliance Program at Columbia University, co-coordinator on a project on the sociology of Representatives in India conducted jointly by Sciences Po, LSE, King's India Institute, JNU and Ambedkar University, Lucknow. He is the co-editor of a forthcoming book on the sociology of elected representatives in India, with Prof. Christophe Jaffrelot and Dr. Sanjay Kumar, CSDS, New Delhi.