Colloquium Series: The Viraktas of Vijayanagara 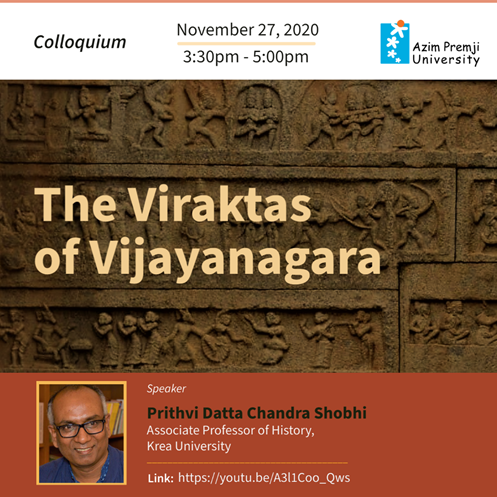 The Viraktas are Shaiva intellectuals and institution builders from late medieval and early modern South India. They are first seen in the medieval capital city of Vijayanagara, where their activities were instrumental in producing a Virashaiva consciousness and a powerful monastic network. Their conception of a Virashaiva self and community continue to remain very influential among Lingayats in the 20th century. Further, the virakta mathas are among the most powerful civil society institutions in South India. Despite their obvious historical and contemporary significance, the viraktas remain absent from the historical record and from historiographyLecture . In my presentation, I intend to address this gap, through a close reading of early modern representations of viraktas in Kannada kavyas. In these representations, the viraktas are depicted as non-conformist and transgressive, often challenging the ruling elite of Vijayanagara. Given this historical context, my objectives are twofold: first, to discuss the nature of virakta asceticism, through an analysis of the virakti of viraktas, in the context of Indian asceticism, and second, to revisit our current understanding of Vijayanagara’s social life, by recuperating the virakta presence in this medieval metropolis. Such an analysis will help us reconstruct the social life and cultural imaginaire of ordinary people in premodern India.

Prithvi Datta Chandra Shobhi works on the social history of medieval and modern South India. His research focuses on the making of communities and subjectivities across different time periods. Prithvi studied history and literature at Jawaharlal Nehru University and at the University of Chicago. He was a postdoctoral fellow at the University of Chicago and a visiting fellow at the Center for the Study of Developing Society. He has taught at San Francisco State University, Karnataka State Open University, American Institute of Indian Studies and Bangalore Central University. At present, he teaches history and humanities at Krea University and also serves as the Chair of the Humanities and Social Sciences Division.   The present talk comes from an ongoing monograph project on the history of Virashaiva-Lingayats, entitled, Hindu or Not: Anxieties of the Self and the Politics of History in the Making of the Virashaiva-Lingayats.