The starting point of this Issue is Mahatma Gandhi’s Nai Talim which he envisaged over many years and made available in 1937. Children learn by making and doing, and it is by relating these two to the larger context that the understanding of the whole picture emerges. It is this larger picture that this issue has attempted to present. This issue also explores the relevance of Nai Talim in the India of today. The explorations are on the idea of Nai Talim and the overall visions of a ‘good society’, rethinking Nai Talim in the light of the NCF of 2005, as well as in the present context. 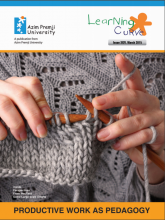 Some thoughts from Dr Krishna Kumar

The Essence of Basic Education

Learning Outdoors through Action and Reflection

Work and Education-Thulir's Experiences and Reflections

Creating a Society that Cares

Education Through Work (Mushroom Production) and Its Relation to Other subjects

Learning to Live Sustainably Reflections based on the Paryavaran Mitra programme

Earthian Program - Through the Lens of Work and Education