In this issue, which appropriately featured Srinivasa Ramanujan on the cover, we started with Lagrange’s Four Squares Theorem followed by articles on games of chance; on the axiomatic basis of origami, and an unexpected construction possible under the rules of paper folding; on a beautiful theorem of Euclidean geometry called Viviani’s theorem; and on using a spreadsheet to explore the famous conundrum known as the ‘Monty Hall problem’. We also covered one of the premier events in mathematics education, held once in four years – ICME 12, which took place in Seoul, South Korea in July 2012. Following this we had articles on the role of open-ended questioning in classroom teaching; on pitfalls in the teaching of the method of induction. In the ‘Math Club’ column we studied a seemingly commonplace problem from the region shared by geometry, combinatorics and sequences. The ‘Pullout’ featured the teaching of decimal fractions. The ‘Review’ page features one of the best used sites in school level mathematics: the site belonging to the NRICH project of the University of Cambridge. 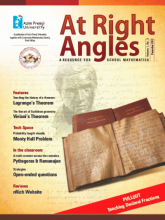 Pitfalls in …The Method of Induction

How To...Solve a Geometry Problem – I

Math club - find the next number

A Surprising Fact about Triangles with a 60 degree Angle

Problems for the Middle School

Problems for the Senior School