We featured in this issue one of the great characters of twentieth century mathematics: Paul Erdős. This was appropriate as 2013 is the centenary year of his birth. Next, there was an article on the derivation of Brahmagupta’s formula for area of a cyclic quadrilateral via the use of Heron’s formula. In ‘Classroom’ we had an essay on Angles which explores some pitfalls that can waylay the learner. In Math Club we had a piece on the combinatorics of Braille. 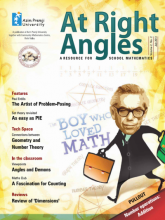 Paul Erdos - The Artist of Problem-Posing

Connections between Geometry and Number Theory

Problems for the Middle School

Problems for the Senior School

Dumble - Door to the Rescue!