Annual Martyrdom Day Lecture: "The Role of the Working Class in the Freedom Struggle" 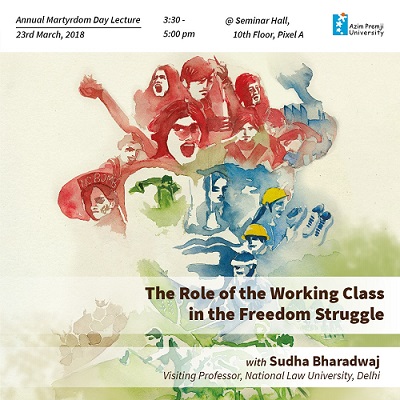 We rarely acknowledge the role of the toiling people in the freedom struggle. The struggles of the adivasis, the peasants and the working class, though they were what gave the freedom struggle its mass base, are at most given lip service in our text books. But the fact is that the workers made enormous sacrifices in the struggle for Indian Independence by choosing political goals over their immediate economic demands. Starting in 1908 right from the political hartal in Mumbai against Bal Gangadhar Tilak's conviction to the strikes in Howrah against the partition of Bengal; from the Railway strikes in Punjab leading to the deportation of  Ajit Singh in 1907 to the Ahmedabad textile strikes against Gandhiji's arrest leading to political crackdown; from the Sholapur commune to the dock workers of Bengal refusing to unload armaments in the Second World War – all these were cases of nationalist indignation by the Indian working class.

In our times, particularly when the picture of the "lazy worker", the "corrupt trade union leader". the so-called "Inspector Raj" and the need for "flexibility" dominate the discourse on industrial relations, we need to remember that it was the industrial workers of Mumbai who, in their heroic and lonely support to the Mutiny of the Naval Ratings in 1946, hammered the last nail in the coffin of British imperialism.

Though in his brief revolutionary life, Bhagat Singh had little opportunity to associate with the struggles of the workers, the importance he gave these struggles in achieving the goal of socialism is inherent in his protest against the Trades Disputes Bill that banned political strikes and strikes in sympathy, something which is the law even today.

Ms. Sudha Bharadwaj is a trade unionist and human rights lawyer working in Chhattisgarh for the past three decades. She is one of the National Secretaries of the People's Union for Civil Liberties and is presently a Visiting Professor at the National Law University, Delhi.

About the Martyrdom Day Lectures

The Martyrdom Day lecture is organised annually to remind and inspire ourselves regarding the ideas and activities of India’s freedom fighters. As a part of this series, in 2017, the well-known social activist Ashok Choudhary delivered the lecture on “Remembering the Nationalism of Republican Socialist Revolutionaries”. In 2016, Prof Mridula Mukherjee spoke on “Bhagat Singh and the Ideological Redefinition of Revolutionary Nationalism”. This lecture, in 2015, was delivered by Prof Chaman Lal. He spoke on “Relevance of Bhagat Singh’s ideas in our Times”.