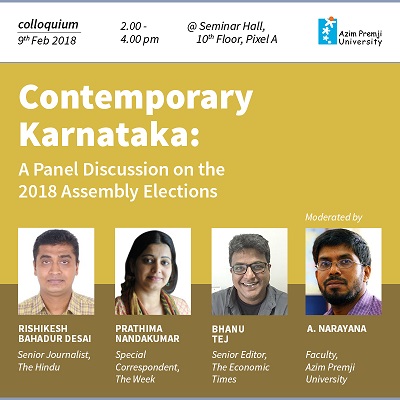 As part of the State-by-State Panel Discussion Series, this colloquium focuses on the imminent State Assembly Elections in Karnataka. A panel of three journalists will share their observations on the electoral realities of the state. Each one of them will offer a close scrutiny of a major geo-political sub-region of the state they have studied closely, i.e. Coastal Karnataka, North Karnataka and South Karnataka.

Rishikesh Bahadur Desai is Senior Journalist with The Hindu and is based in Belagavi.

Prathima Nandakumar is Special Correspondent with The Week magazine and is based in Bengaluru. She has reported extensively on social and political issues pertaining to Karnataka during the last seventeen years of work with The Times of India (Bangalore and Ahmedabad), Deccan Herald, Deccan Chronicle, and Udayavani Morning News across three cities Bangalore, Vadodara, and Manipal.

Bhanu Tej is Senior Editor with The Economic Times and is based in Bengaluru. Over a two-decade-long journalist career, he has previously covered Karnataka for The Week, The Indian Express, The Times of India and Al Jazeera Online. He has started the Namma Bengaluru page in The Economic Times, which is the newspaper's first and only experiment with non-business coverage.