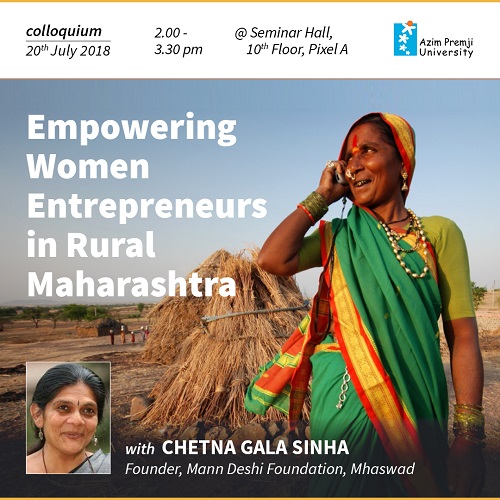 In the talk, the speaker discusses her work towards empowering women entrepreneurs in rural Maharashtra: how she has come to think of the term financial inclusion, the challenges to inclusion (social, economic, ecological etc) that she has to navigate and address, what it takes for women from rural areas and marginalised communities to become entrepreneurs. She will also talk about the changing policy context in which Mann Deshi bank has been working in the past few decades.

Chetna Gala Sinha is an activist, farmer and banker. In 1996, she founded the Mann Deshi Foundation in Mhaswad, a drought-stricken area of Maharashtra, with the aim of economically and socially empowering rural women. In 1997, she set up the Mann Deshi Mahila Sahakari Bank - India’s first bank for and by rural women. To date, Mann Deshi has supported over 400,000 women and plans to reach one million women entrepreneurs by 2022. Chetna has been instrumental in driving significant policy changes including advocating with the RBI to relax stringent KYC norms so low-income customers could open bank accounts and creating the first low-cost pension scheme for women micro-entrepreneurs in 2007 which influenced the national Pradhan Mantri Atal Pension Yojana  (2015). She has received many awards for her work. including Jankidevi Bajaj Award for Rural Entrepreneurship (2005), Ashoka Changemakers Award (2005), Godfrey Phillips Bravery Award (2009), EdelGive Social Innovation Honors (Livelihood Category) (2010), the Schwab Foundation’s Social Entrepreneur of the Year (2013) and theForbes Social Entrepreneurs of the Year Award (2017). In January 2018, she served as a Co-Chair of the World Economic Forum in Davos, Switzerland.