Colloquium Series: We are the Music Makers 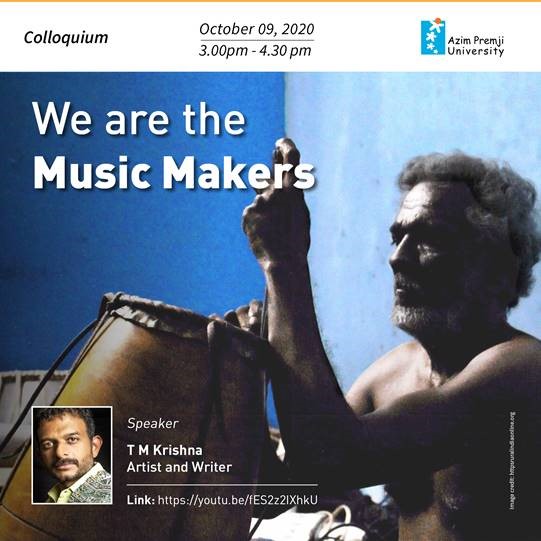 The mrdangam is an integral part of the Karnatik stage, its primary percussion instrument. Yet—startling as this is— the instrument as we know it is only a century old. This lecture investigates the history of the mrdangam and meets the invisible keepers of a tradition: the mrdangam makers.  The making process is an intellectually, aesthetically and physically taxing one. From acquiring the skins for the circular membranes and straps to the wood for the drum, from curing the material to the final construction, and at the end of it all, making sure that it has the tone that the mrdangam player wants, mrdangam-making is also a highly nuanced operation at every stage. While several artists have been credited with the evolution of the instrument, none of them had knowledge of a fundamental aspect of the making: hide. The quality of the hide and how it is cured, cut, stretched, bound and braided impacts the tone, timbre and sound of the instrument. This requires a highly tuned ear and an ability to translate abstract ideas expressed by musicians into the corporeal reality of a mrdangam. Yet, their contribution to the art of the mrdangam is dismissed as labour and repair—when it is spoken of at all. There are legendary mrdangam players, yes; there are also distinguished mrdangam makers, many of them from Dalit Christian communities, who remain on the fringes of the Karnatik community.  This talk explores the world of these artists, their history, lore and lived experience to arrive at a more organic and holistic understanding of the music that the mrdangam makes.

Thodur Madabusi Krishna is a vocalist in the Karnatik tradition. He studied at the Krishnamurti Foundation’s The School in Chennai, and Jiddu Krishnmurti’s philosophy of ‘pathlessness’ has unmistakably influenced Krishna’s un-preconditioned journeys over the Karnatik continent. Krishna’s musical grounding was honed into mastery under the tutelage of Vidvans Seetharama Sarma, Chingleput Ranganathan and the legendary Semmangudi Srinivasier. Krishna thinks upon and writes about issues affecting the human condition and about matters musical. He has started and is involved in many organizations whose work is spread across the whole spectrum of Karnatik music, including research, archiving and documentation, taking Karnatik music to smaller towns and villages and supporting artists from rural south India. His books include Reshaping Art (Aleph, 2018), A Southern Music: The Karnatik Story (2013) and a co-authored work,Voices Within: Carnatic Music: Passing on an Inheritance.  His most recent book is Sebastian and Sons: A Brief History of Mrdangam Makers (Context, 2020).