Education policies have resulted in several enduring legacies in keeping with the ever-changing society, as well as its political manifestos. Because of the dynamic nature of society in general, and the speed with which the world changes, bringing with it changes vis-a-vis every aspect of socio-economic-political change, national education policies from 1968 have seen changes in 1986, 1992 and now a draft policy in 2016. It is expected that each policy, when introduced, will take into account the demands of the day while preserving the central core of its goals. National educational policies are, or at least should be, the consequence of a clear understanding of the socio-cultural beliefs of India, and at the same time having clarity in introducing a system that is aligned to the goals enshrined in our Constitution and has the avowed purpose of creating a democratic society of enlightened citizens. In this Issue, we have articles which examine education policies from 1968, which was the starting point chosen for this issue. The draft policy of 2016 has been closely examined, as have the ways in which language and literacy have been addressed. Another article is an examination of the history of educational policy documents. Other articles have been written about specific aspects such as CCE and the Midday Meal Scheme. This is only a sampling and we hope that readers will find this Issue interesting. 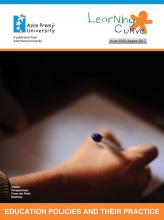 Checking Areas of Concern: What the Inputs Document has to say about Saffronisation Inequality and Privatisation

Some Points for Discussion in the Proposal for the Draft National Education Policy, 2016

A Giridhar Rao and Shailaja Menon

Education and Employment: A View from the Periphery

There is no Alternative to This

Emerging Challenges before Continuous and Comprehensive Evaluation: From a Teacher’s Point of View